THE IT SOLUTION FOR YOUR SMALL BUSINESS

Proof That the Internet Can Change a Man’s Life

If there is anything that has been proven over the past few weeks, it is that the internet can change a man’s life.

Now, you may think that I am referring to Barack Obama and his historical win, fed in some part by his amazing internet presence.  Or, perhaps even John McCain’s amazing lack of one.

It is the fact that Rick Astley was at the Macy’s Thanksgiving Day Parade, based soley on a funny-at-first-and-then-increasingly-tiresome internet practical “joke“. 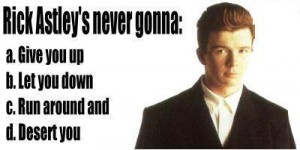